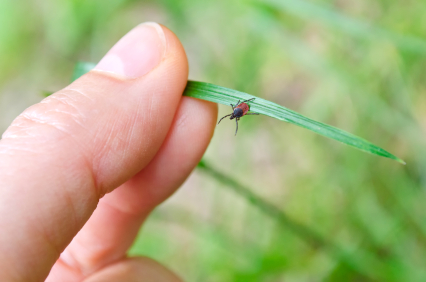 Tick seeking a meal- they can’t see, those two front legs reach out for an unsuspecting host, then they climb aboard and crawl undetected to feed.

Did you know that we live among vampires-– creatures that can survive only on the blood of others? Creatures that, like vampires, are really hard to kill?

Like any good vampire tale, the tick’s tale generally begins with a death– the death of the “mother” tick. You see her life’s work is to find exactly three victims to feed upon as she goes through each stage of her life, and then she dies after giving birth.

She lives just months, or years, depending largely upon how quickly she finds victims to feed on (scientists like to call these victims “hosts”). After taking a large blood meal from her third (and final) victim, she lays a HUGE batch of eggs… as many as 4,000… and then she dies. These 4,000 babies hatch and immediately begin looking for a meal.

Tiny ticks sneak onto their hosts in ways that rival the hypnotic trance of a vampire. They wait for a victim to come into physical contact with them for example, by brushing up against the blade of grass they’re waiting on. They hold out two legs and grab whatever walks by.

They’re very small and crawl very slowly so not to be detected. Then before they bite their victim, they actually secrete a chemical from their mouth that has anesthetic properties so you don’t feel the bite.

Once one of these tiny vampires begins to enjoy a nice meal of blood, they secrete an anti-coagulant so that the blood won’t clot while they’re eating. This clever trick allows them to feed (i.e. drink your blood) undetected for days. Their tiny mouths secrete a cement-like substance that attaches them firmly to their meal, and makes them hard to dislodge – accidentally or intentionally.

All three stages of ticks – larva, nymph and adult -require a meal of blood from a host. When full, they detach from their host and develop into their next stage.

If ticks just stole a meal and left in peace that would be one thing. But ticks are carriers for many serious diseases and the bacteria enter us (and our pets) while they’re feeding. Since ticks numb their host before biting, unless you happen to see them, they can generally feed undisturbed until they’re full. And the longer they’re attached, the more likely it is that they’ll transmit disease.

IF a female tick is carrying one or more of the many diseases ticks transmit, her eggs are all infected and any one of her 4,000 “babies” can transmit disease to their very first host.

Ticks are the most patient of parasites. They don’t travel far, they just wait for a meal to come to them. Mice most frequently provide the first blood meal for newly hatched ticks, but birds also pick up these baby vampires when they land on the ground to feed.

In fact, it’s believed that Lyme disease, now creeping into the southern US, is being spread by infected ticks hitchhiking south on migrating birds.

I’m making a light-hearted comparison between ticks & vampires – but in reality, ticks are no laughing matter. For many reasons, tick populations are booming, as are rates of disease transmitted from ticks.

The Centers for Disease Control last compiled reported cases of Lyme disease in 2009, and there were three times more cases than 20 years earlier. Most researchers think that true infection rates from tick bites are really 5-10 times higher than those reported.

At Noah’s Ark, our annual heartworm test also screens for exposure to three different tick diseases. Each week we find pets that have been exposed to a serious disease through a tick bite.

Lyme disease is the tick-transmitted disease with the best PR agency. Everyone knows to watch for a bulls-eye rash after getting a tick bite. But did you know that up to 25% of people who are eventually diagnosed with Lyme never get the famous bulls eye rash?

In my line of work I’m talking to people all day long about fleas. I always warn of the more serious danger that ticks pose. I hear over and over again “My dog doesn’t get ticks” or “I never see any ticks”.

What you need to remember is this:

1. Ticks are tiny, tricky, and by design tough to see. Folks are used to being able to see the giant engorged ticks that we often pull off of dogs. Those giant ticks are females in the adult stage. They’re eating their final meal before laying their thousands of eggs. In this stage they swell to 100 TIMES THEIR ORIGINAL WEIGHT!

2. Male ticks never swell to a giant size. Larva (called “seed ticks”) and nymphs are much, much smaller.
But don’t be complacent – male and female ticks in all life stages need a blood meal to survive, and can transmit disease.

3. Even if you aren’t an avid hiker, or rarely even walk the greenway, if you’re reading this email you probably have dogs and cats that you love. These furry family members may even sleep in your bed.
Ticks can hitchhike right into your home on them.

4. Ticks are a threat in North Carolina 12 months out of the year. Ticks can warm up and come out for a meal any day it warms up past freezing. Just one of the many fantastic things about living here is that you can get a day that’s 70 degrees and sunny, occasionally even in the winter. Ticks never think “hey, I’m staying put, it may be 12 degrees tomorrow”.

What’s a responsible pet parent to do?

Be sure all your pets are protected from the health hazard ticks pose by applying a product that kills ticks each and every month all year long.

We recommend Frontline Tritak for killing ticks fast, usually before they can attach. Frontline Plus also is effective against ticks. We have great coupons to make these products affordable, and if you purchase a 6 month supply of Frontline Tritak or Frontline Plus, you can get an additional $15 off any professional service at Noah’s Ark.