What to do when your dog growls 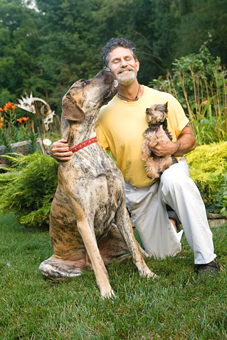 I’ve been living with anywhere from 10 to 50 dogs for over 20 years. During that time I’ve evaluated hundreds of shelter dogs, and I’ve brought more rescue dogs than I can count into our home– usually without knowing much at all about their history. What has always amazed me is how rarely these dogs bite.

Let’s be clear, all dogs – even tiny ones – come equipped with jaws and teeth. Every dog can bite, but only a few actually do bite.

Over the years I’ve observed the emotional, as well as physical suffering that goes on in a family living with a canine “felon.” Big Caesar, the magnificent 180-pound Great Dane shown here with Dr. Todd, has just one felony on his criminal record — but it’s a big one. Looks so innocent doesn’t he?

Families who live with biting dogs agonize over how to best manage them. They try mightily to rationalize their dog’s bad behavior -“he got upset because I woke him”, “she’s never liked Uncle Ted”.

The truth is, we don’t ever know the exact reason a dog bites; and while I don’t rule out the possibility that there are doggie “psychopaths” out there… just born to be bad… the vast majority of dogs who become aggressive learned that behavior, and their human parents simply missed all the warning signs.

Fortunately we know a great deal about how dogs learn, and how behaviors form, so let’s start there!

While canine aggression is an extremely complicated subject, with entire academic textbooks devoted to it, I’m going to be brave and risk over-simplifying to share with you the four things I think are most important to remember if you want to be sure your canine is a good citizen, a good neighbor, and an enjoyable family member.

Tip # 1: ALWAYS let puppies stay with their litter for a minimum of 8 weeks, nine weeks is even better.

Dogs learn about inhibiting the force of their bites as puppies.The first nine weeks of a puppy’s life is an important time. Puppies in a litter learn quickly that when they bite too hard, their playmate yelps and stops playing with them. That’s a powerful lesson. Mother’s get up and leave when pups get too rowdy and bite too hard.

Many people come to Noah’s Ark with extremely young puppies. Unscrupulous breeders are anxious to make a quick profit, so they sell puppies as early as possible. Sometimes the real birthday is noted. Sometimes we examine puppies that are clearly not as old as their new unsuspecting humans were led to believe.

AVOID PUPPY MILLS which for brevity I’ll define here as a person or group that breeds dogs for profit – not to maintain and improve a particular breed. For those readers who live here in Franklin, that includes ANYONE who sells dogs in the Walmart parking lot.

Tip #2: Socialization and gentle handling are keys to building the foundation for a canine good citizen and a great family member.

The first six months of a dog’s life is when they’re most impressionable. It’s equivalent to approximately the first 4-5 years of a human baby’s development. Once puppies leave their litter, they need to be well socialized to other dogs, other pets in the house, different places, and lots and lots of humans.

Many veterinarians encourage their clients to leave their dogs at home until they are fully vaccinated. I believe that’s a mistake. Far more dogs are euthanized for anti-social behavior than die of a virus contracted while visiting a friend. Our vaccine schedule will keep your puppy protected from deadly diseases.

By six months, puppies should have learned how to play properly with humans. At this age, your puppy should not be putting his teeth on your skin – even during play. Puppies need to learn that all humans are delicate creatures, and skin is off limits. Keep reading to learn more about our Puppy Preschool- a great place for pups to learn good habits from the start.

Tip #3: Almost all dogs warn before they bite.

If you’re lucky enough to catch that warning, stop what you’re doing and contact Noah’s Ark.

There’s a very predictable progression of warnings leading up to a dog bite. The problem is, sometimes you have to be a trained professional who “speaks dog” to see the signs.

Most dogs start with warnings that don’t injure, and if those don’t work, they progress to more drastic measures. In the beginning the dog may “freeze”, then they’ll progress to a growl or some sort of vocalization, then a snap without contacting skin, then a snap that contacts skin but leaves no mark, then a bite that leaves a mark but doesn’t break skin, then broken skin…. and on to more serious bites.

The most common mistake I see pet parents make is to scold or punish their dog when he or she growls. If you successfully “train” your dog not to growl, you’ve taken away the dog’s ability to say “Hey dude, you’re freaking me out!”. If your dog growls at you for any reason, call for a consultation — we can help!

Tip #4: Never let your dog (or your children for that matter) practice a behavior you want to extinguish.

The best prognosis for stopping and eliminating undesirable behavior is to intervene as soon as possible when these behaviors begin. Don’t wait for catastrophe to strike.

If you observe your dog freezing when you take something away, growling or snapping at you, and especially if your dog has bitten anyone, let us help! If you have a Well Plan, a behavior consultation is included in your plan. Come to us first for expert advice.